Better many times over than the usual ways of extending battery life.

The way in which a lead-acid battery works cannot be discussed in terms of chemistry alone. The interactions that occur at the electrode surfaces are governed by the laws of physics. It is all explained in easy-to-understand language on the technical pages. 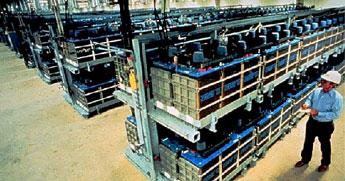 BIGGEST BATTERY IN THE WORLD PROMPTED US TO DEVELOP BATTERYVITAMIN.

We developed and manufactured the automatic watering valve - activated carbon stibine/ arsine filter - flame arrestor units for this battery. (Filter based on US Statutory Invention H816, assigned to US Secretary of the Navy.)

The Chino battery provided an important milestone in terms of battery life management. We recognized the unqualified success of this battery. It persuaded the directors of our company to invest serious time and money in R&D, to develop an easy to use technology that can give motive power battery operators hands-on control over the life expectancy of their valuable batteries. It took twelve years. We named it Batteryvitamin.

BREAKTHROUGH. Positive grid corrosion, over many years, leads to shedding of active material from the positive plates and is the ultimate cause of lead-acid battery failure. The Chino battery, (based on submarine battery technology), with its natural rubber separators gave us valuable information about corrosion control. We discovered that the electrochemistry behind corrosion in lead-acid batteries has much in common with the electrochemistry behind electroplating. The convergence of these two acted as the catalyst we needed to make the breakthrough. Ideas like Batteryvitamin are created by practical need. Corrosion treatment of lead-acid motive power (and deep cycling) batteries has been fully developed by us into a practical and successful battery servicing routine.

VALUABLE. Battery life extension has obvious market appeal - every 1% increase in lead-acid battery life, on a world-wide basis, has an estimated value of $0.9 billion per year.

BUSINESS. We commissioned an independent battery laboratory to test our technology. The laboratory used comparative testing based on a national (USA) battery deep cycle testing procedure. Field trials were run over ten years in four different countries. We thoroughly investigated the technology right down to its basic underlying interactive molecular level and have included all this detailed information on the pages of this website. We are supremely confident Batteryvitamin has excellent business potential.

BUSINESS, an outline of corrosion treatment in terms of a new service business concept, plus financial analysis.

BATTERYVITAMIN. Our corrosion treatment is purpose designed to treat corrosion of the positive plate grids of batteries that are in service, while in service. It took a long time to develop because the mechanism involved is very complex. It does not work directly on the positive plates. It is an indirect process that starts when the dissolved metal portion of the waste produced by positive grid corrosion is held back at the surfaces of the negative plates. When this happens, the corrosion of the positive grids automatically ends up being suppressed - and as a consequence the positive plates last much longer. The process requires a corrosion inhibiting substance to be put into the battery to help hold back the dissolved metal portion produced by corrosion. Batteryvitamin contains such a substance and is thereby uniquely suited to extend battery life.

Testing was performed on 100 A-h Group CG-2 batteries according to Battery Council International Deep Cycling Test Procedure 5/93. Batteries charged at 30A, to a limit of 2.55V per cell, until 130% of the previous discharged capacity had been returned. Discharge at 75A down to 1.75V per cell. Batteries were rested until the discharge time + the period of inactivity = 4 hours, before commencement of the next cycle. Each battery was deep cycled until its individual discharge capacity fell below 80% of the manufacturer's stated A-h rating. Testing by independent Kan Laboratories, Inc., Hoffman Estates, Chicago, USA.

BACKGROUND. Our testing was directed at finding a practical, fundamentally sound way of extending battery life and thereby help to fulfill consumer expectations. We did not simply test the batteries, we closely monitored the batteries throughout the entire testing procedure.

We ran several tests. Each test was begun with 12 batteries. Two batteries - one untreated and one treated - were torn down at intervals for careful analysis during the course of testing, giving us a step-by-step factual picture of (1) the wearing out process and (2) the counteracting process, as they unfolded, from the beginning to the end. 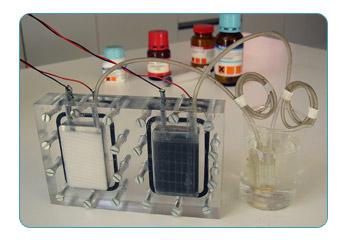 We followed up with hundreds of additional tests on hand-made battery cells and succeeded in verifying every technical detail at work. It is a rich, new technology, fully explained on the pages of this website.

SULFATION. Battery reconditioning specialists insist the vast majority of failed batteries they receive are sulfated. These batteries failed due a wide variety of causes - thereafter will not have been on charge for some time - not surprisingly, they ended up sulfated. It is important to note that sulfation occurs almost exclusively in automobile, truck, golf cart and, in particular, marine batteries because, unfortunately, these batteries often receive insufficient charge.

CORROSION. Telephone exchanges around the world have 24 cell lead-acid batteries, kept on float charge at 52-54 volts. Typically last 20 years. Millions of forklift truck lead-acid batteries in use world-wide are repeatedly deep cycled, (very stressful for batteries). Typically last 5 years. When these standby and motive power batteries finally wear out, it is because their positive plates have, over time, developed a variety of defects, predominantly as a result of positive grid corrosion. This represents hard evidence: Corrosion, not sulfation causes batteries to wear out.

MAJORITY. An argument consistently put forward is that desulfation has been used "to extend battery life" for such a long time, by so many, it is simply impossible for everybody to have been wrong all along. That line of reasoning has already received its comeuppance at the highest professional level. The following example is based on fact. At a time when the total world population of doctors was 8.4 million, there were two doctors who refused to believe stomach ulcers were caused by stress and lifestyle. In 1984 Dr. Barry Marshall and Dr. Robin Warren of Perth, Australia demonstrated stomach ulcers were, in fact, caused by a bacterium called Helicobacter pylori. No operations required - simply take an antibiotic! They were awarded the Nobel Prize in physiology in 2005.

SEPARATORS. Rubber separators have a reputation for technical excellence in the lead-acid battery industry. Not for extending battery life but for improving other aspects of battery operation. There is an ingredient in natural rubber that slowly leaches out over the lifetime of the battery. The ingredient may be present in the electrolyte at only a few parts per million. Yet at this low concentration it manages to provide superb retardation of antimony transfer and superb water consumption control. We have found that Batteryvitamin is able to emulate rubber and have developed a special version of the Batteryvitamin chemical compound that is suitable for inclusion in ultra-high-molecular-weight-polyethylene/ precipitated-silica battery separators.

CONCLUSION. We tried to present the best information at our disposal.