Batteryvitamin is able to provide a surprising second benefit - while working to extend battery life it will also be helping to reduce the water consumption of the battery. A saving of up to 50 percent can be achieved.

Tests have been suggesting there is an empirical relationship between the two which holds that a battery in a given situation uses the same amount of water during its lifetime and if taken as fixed, on application of the Batteryvitamin substance, the resulting reduced percentage in water consumption will be matched by an equivalent percentage in extended battery life, according to the expression:

For example, with the water consumption down to 66.7 percent, then:

The photograph below shows how an enterprising battery user in the Netherlands arranged a highly effective and inexpensive way of recording the water consumption by marking off the level of the water / Batteryvitamin mixture on the semi-transparent plastic tank after each successive watering. 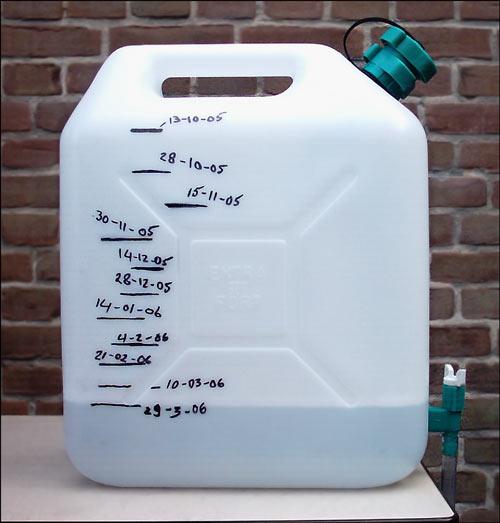 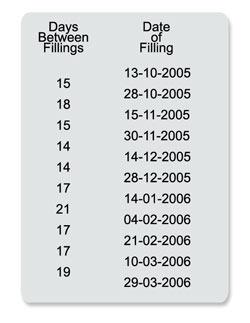 The recordings confirm that it takes roughly 10 weeks for Batteryvitamin to build up to its full working potential inside the battery.

Batteryvitamin is able to reduce water consumption through its effect on the negative plates of the battery. The barrier forming on the surface of the negative plates acts like an ionic sieve which, besides providing an obstacle to the larger metal ions is able to restrict, although not stop the small electrolysis producing ions, reducing gassing and hence reducing water consumption - also see "Life Expectancy".