More than half a century ago when lead-acid battery manufacturers switched from wood veneer separators to synthetic materials, the changeover inadvertently caused battery life to crash. While the solution was found in the use of ligno-sulfonates, other than empirically re-formulating these substances, it seems hardly any investment has been made in the utilization of organic materials to purposefully continue to enhance battery performance.

It has not been possible to work out why rubber separators improve battery performance, how rubber goes to work and what ingredient in rubber is responsible for the improved performance, until recently. Batteryvitamin is designed to put organic technology back in the running so as to better equip the lead-acid battery industry to meet the inevitable difficult commercial challenges that lie ahead.

We identified the ingredient in rubber separators. Then we improved it. Our ongoing R & D has produced liquid and solid versions. We call them Batteryvitamin. A watery liquid version can be put into the battery refill water, another more oily version in the PE and PVC battery separators in the same way as pigments and plasticizers. The solid version is suitable for building into the negative plates of batteries. This gives manufacturers who use these materials a very big advantage in the market place. We describe experminents with the solid version below.

Batteryvitamin S2, (solid), can help to achieve calcium-like low water consumption from antimony alloy batteries - but to do so a formation catalyst in the electrolyte has to be used.

The catalyst has a half-life roughly equal to the duration of the formation charge - disappearing without a trace after only a few days.

The advantages of Batteryvitamin S2 plus formation catalyst are significant. The use of recycled lead carrying a large impurity burden is facilitated. Batteries can be provided with long lasting antimony alloy positives and low water consuming calcium alloy negatives - resulting in the best of both worlds in service.

For example, the way would be cleared for industrial motive power batteries and golf cart batteries to be watered no more than once a year (!). Hybrid and electric automobile batteries could be made very inexpensively, yet provide a highly satisfactory battery life.

Batteryvitamin S2 does not dissolve in water or in battery acid. A suitable organic solvent is used to dissolve Batteryvitamin S2 material. The negative plate receives solution by carefully pouring over the surface of the plate, while held horizontally, and allowing to soak in. The plate is gently warmed to drive off the solvent. Weighing before and after confirms 0.1 to 0.2 percent concentration in these ready-made plates.

The following diagrams provide details of the test procedure. 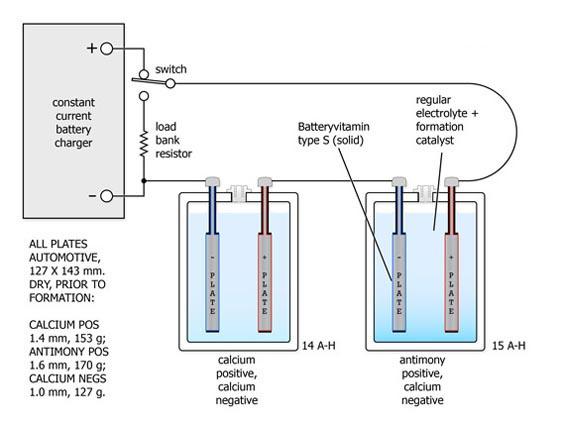 The two cells received formation charging connected in series and were subsequently deep cycled twice to ascertain their ampere-hour capacities. The antimony positive cell appeared to have about 7% more capacity than the calcium positive cell - likely due to its positive plate being fractionally thicker. The antimony's end-of-charge dV/dt had been considerably speeded up and more sharply defined. 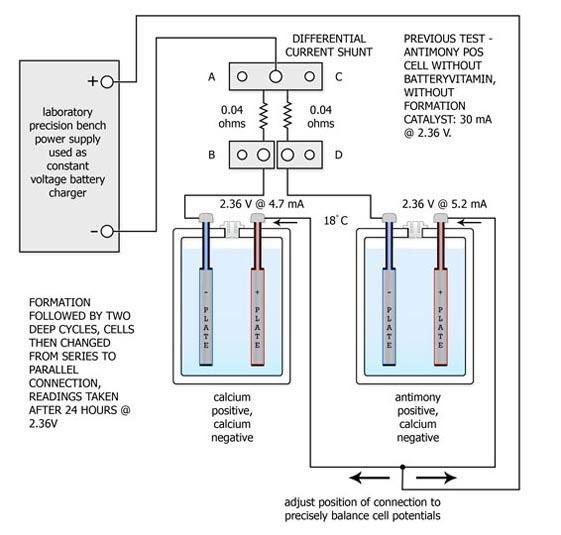 The cells were reconnected as shown above and the potentials across both cells were carefully adjusted to match each other using a high resolution Hewlett-Packard digital voltmeter. The currents via the cells were measured with a specially constructed differential shunt resistor network having a matching accuracy batter than 0.1% . The current of the Ca-Ca cell was measured across A - B, the current of the Sb-Ca cell was measured across C - D and the differential was monitored across B - D, again using the H-P instrument.

Subsequent cycling of the cells in parallel was performed. Discharging at the 5 hour rate down to 1.50 V/cell and charging at the 20 hour rate up to an average of 2.60 V/cell - holding this voltage for 5 hours and then lowering it to 2.36 V/cell for 24 hours to measure the electrolysis current.

The positive plate of the Ca-Ca cell was replaced with an identical freshly formed and precycled plate, resulting in the electrolysis current rising to 4.6 mA and the capacity being restored to 14 A-H.

Had the Ca-Ca cell been defective? To find out, two more Ca-Ca cells were built, formed and tested in the same way. Both suffered similar capacity loss. Indeed, numerous publications have described this kind of capacity loss and therefore it must be accepted that lead-calcium alloy technology might well prove to be an evolutionary dead-end.

Since treatment assists in increasing battery life, the upsurge in water consumption at the end of the useful service life of a motive power battery is delayed. In this context battery leasing, once a year maintenance, at a fixed price - no watering hassles in between - seems to look set to become a reality.

The previous test showing the advantages of Batteryvitamin S2 in automotive battery application was repeated using motive power battery components and a substantial amount of carbon additive, plus Batteryvitamin S2.

A high concentration of carbon in the negative active material can enhance battery performance significantly, although the relatively low hydrogen overpotential of this material can lead to excessive gassing. The test shows this nuisance can not only be entirely eliminated, the end-of-charge current of the treated cell can be reduced by a factor of four compared to a conventional cell by the use of Batteryvitamin S2.

The test plates were obtained by disassembling a 6 volt, 150 ampere-hour golf-cart battery that had not yet been formed. The plates were cut down to the required size. The procedure has been used for many years and can provide excellent quality plates down to one or two ampere-hour capacity.

The negative active material was removed from the grids and ground to a fine powder. This powder was then mixed 2 percent by weight of activated carbon powder and 1 percent by weight of Batteryvitamin S2. The mixtue received a small quantity of dilute sulfuric acid, sufficient to produce a paste of the requisite consistency. This paste was pressed, while still hot from teh acid reaction, into suitably sized metal grid sections. The plates were cured and the active material appeared to be mechanically similar to the active material of the plates that had been sacrificed. 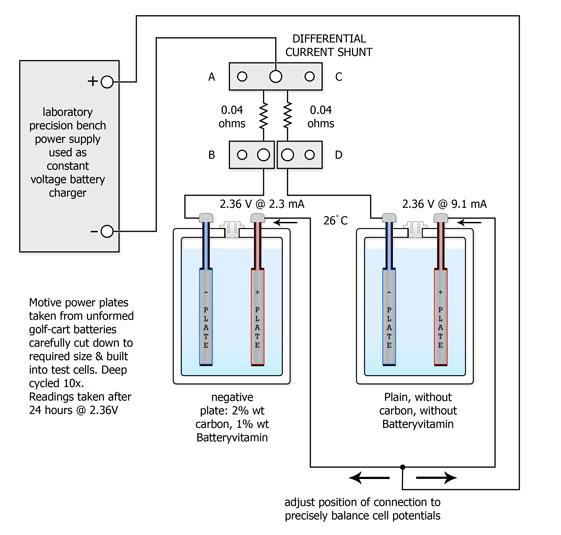 The cells were assembled and formed. The treated cells provided an initial rate of gassing following formation that was disapointing. After two deep cycles the end-if-charge rate of gassing fell dramatically - measuring a quarter of the untreated cell after ten cycles.

Battery purists might feel uncomfortable with the plate making technique yet the deep cycling runs confirmed the ampere-hour capacities of the test cells closely matched each other and closely matched the original negatiive plate cell capacity.

The two-plate construction provides a simple, accurate and efficient test bedm although the internal impedance of the cells is likely to be sub-optimal. This disadvantage is negated by comparing like with like. The treated cell exhibited a vastly superior voltage stability comparent to the untreated cell when subjected to 2C, 5C and 10C discharge and charge surges.

Experiments of this type apply the scale-it-down and speed-it-up research technique used by bridge builders and ship builders to lead-acid technology. They are easy to repeat and therefore easy to verify.

This experiment has shown that the beneficial properties of carbon and of Batteryvitamin can be combined, implying that this combination can help to pave the way to a new era of super batteries.

Ongoing research has shown Batteryvitamin has many more qualities or facets than the one that extends battery life. Take for example improvements in maintenance-free and thin-plate technology, optimization of automotive and opportunity charged batteries, reducing water consumption and administering water treatment. The underlying mechanism is always the same, yet the benefits can be wide and varied. What Batteryvitamin does inside the battery helps to overcome major battery shortcomings. This can offer battery manufacturers a direct route to improving battery performance and assuring customer satisfaction.

Batteryvitamin L has been in use for over a decade on tens of thousands of motive power batteries. Batteryvitamin is subject to terms and conditions.